Is The US Headed For A Recession 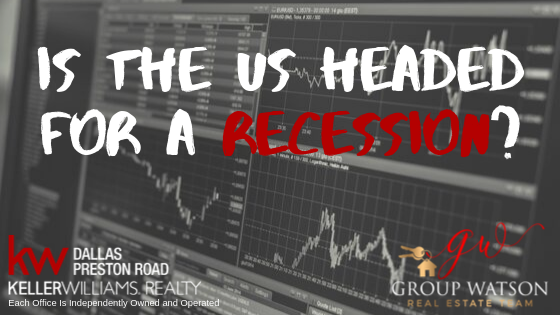 Lately some of the headlines have talked about signs of a recession on the horizon, and there’s a few reasons for this. Now, we aren’t economists and we don’t have a crystal ball, but we have consulted some of the experts, read the facts. Here’s our take on the situation, what you need to know, and how it might impact the housing market.

Let’s begin with the basics. According to Kelly Milligan, an attorney with Chicago Title in Dallas that frequently speaks about economic activity, a recession is defined as 2 consecutive quarters (or 6 months) of GDP loss. GDP stands for Gross Domestic Product, which is the total value of every good and service produced within the US, and an overall way to measure the health of the US economy. The last quarter that showed a loss in GDP was in 2009. Growth has slowed some, from 3% to about 2.1%, but notice it is still growing and not contracting.

You may have never heard of a yield curve before, but it’s been all over the news in recent weeks as a sign of impending doom, or at least that’s what the reporters make it sound like. But what is it? The yield curve is basically an index of rates relating to the trading of US Treasury bonds in various time periods, ranging from 1 month to 30 years. In a normal economy, the rate an investor can expect on bonds maturing in the short term should be lower than the rate expected on a long term maturity bond, as the risk increases the longer an investor holds the bond. What caused the panic in the news is that the curve inverted, or “flipped,” and short term bond yields were higher than long-term yields, meaning that investors saw more risk in the coming months than they did over 30 years. In the past, yield curve inversions have happened prior to recessions. But they are an indicator of investor’s perception of risk, and do not cause a recession on their own. Changing yield rates are an indicator of which time frames investors feel the investment risk is greatest on a daily basis, so it’s constantly changing as new economic data becomes available. Currently, the 30 year rate is once again the highest, but the lowest rate on today’s chart is the 5 year. You can monitor daily yield rates on the US Treasury website (treasury.gov), if you’d like.

As you probably guessed, consumer spending (also called Personal Consumption Expenditures) is money spent on goods or services by people living in the US (or on their behalf). This is another key way to measure the health of the economy. When people are making decent money, and feel financially secure, they tend to spend more money. Consumer confidence is based on survey answers relating to their finances, employment, and general economic outlook. Consumer confidence is reported as an index, with numbers over 100 meaning that people feel good about the economy, and under 100 meaning that they feel uneasy and will lean toward saving and cutting back on spending. Today’s consumer confidence index is 100.8, according to OECD, and has not been below 100 since November 2014. Year over year spending was up 1.4% as of June. We’ve also heard the news that the unemployment rate is a near record low 3.7%, and incomes are up. So, people are making money and they’re spending it.

Stocks are constantly going up and down in knee-jerk reaction to the latest headlines, so they’re not the best indicator of economic health. We may remember those significant days in history when stock prices bottomed out, but those sell-offs were a result of economic troubles, not the cause. Stocks won’t impact the average consumer much, as they tend to be more long term investments for those who aren’t making a living at it. Trade and tariffs are a hot topic among economists and consumers, and they’re likely to have an impact on some of the above indicators. We’re also coming into an election year. A new leader could maintain the current trajectory of the economy, or could bring their own ideas to amplify those effects. Likewise, either could do something to derail it, too.

Interest Rates and The Federal Reserve

The Federal Reserve (aka The Fed) board is tasked with balancing the federal funds rate in order to encourage economic activity, while at the same time keep inflation at a healthy rate. It’s a delicate balance and one that remains mostly independent of political influence. Today they lowered the federal funds rate again, citing the global economy, reduced business spending, and low inflation rates as their reasons.This only the 2nd time the federal funds rate has been reduced rates since the last recession. Rates have steadily increased since 2015 when the quantitative easing that helped bring us out of that recession ended.

We also know that a recession won’t necessarily mean doom and gloom. There have been a few recessions during most of our adult lives. 2008, 2001, 1990-1991, and 2 in the early 1980’s. Each recession impacted different industries, like technology, oil, and energy. 2008 was the recession that hit housing and had a bigger impact on our daily lives the most. We may have had some bumps and bruises through each, but we’re all doing ok today.

Some people have mentioned fears of a looming recession as motivation to delay home a home purchase. We get it, it’s a big financial decision. The most recent recession in 2008 impacted the real estate industry especially, so our recent memories of recession might illicit images of rampant foreclosures and negative equity. But keep in mind, however, that the recession before that in 2001 barely made a dent in home prices at all. As mentioned above, different industries were impacted each time, so if a recession were to happen in coming years, it wouldn’t necessarily mean another housing market crash like we saw in the last one. Lending practices were changed dramatically after the 2008 recession to prevent another mortgage crisis like we saw. And even in a recession children grow up and begin families of their own. Even if those new adults delay home buying a few years until things look better, they’ll need somewhere to live at some point. First time home buyers like these make up about a 3rd of all home purchases in a healthy market, and many first time buyers seek more affordable homes since they don’t often have a chunk of equity from a previous home sale for a down payment.

One more key point made in a recent Candy’s Dirt blog is that the US home construction industry still has not fully recovered from the 2008-2009 recession. Home building came to a screeching halt and many builders went out of business. Because of this, construction workers found jobs elsewhere, many of them never to return to the industry. When the recession ended, employment recovered, and people started buying homes again, we experienced years of low inventory that pushed prices higher and higher, rebounding from recession equity losses and then some. Home builders had and still have challenges today with labor shortages and material costs, keeping inventory lower than the demand for housing. At the same time, these construction industry issues make “entry level housing” unprofitable, keeping new home prices in the higher “move-up” price ranges. A recession could cause home builders to back off again, putting us right back in the same low-inventory, high-demand buying frenzy position afterwards and further reduce the first time home buyer’s affordable home options. Basic supply and demand would tell us that this could once again push home prices higher. Therefore, waiting to buy because you’re thinking if a recession does happen, it might home prices down could potentially backfire.

In conclusion, we all know that the nation’s economy is a vast, complex entity with many different factors impacting it. Based on the expert opinions and available data, it doesn’t appear that the country’s financial health is going down the drain in the immediate future. And if it does, it may not be as bad as the last one, so don’t delay living your life out of fear.

US Department of the Treasury treasury.gov

US Department of Commerce Bureau of Economic Analysis bea.gov

US Bureau of Labor Statistics bls.gov 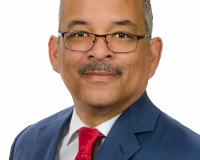 Tom is a customer focused, detail-oriented professional who specializes in building relationships and garnering trust. He spent 20+ years owning a successful Franchise business, which taught him to st....

The financial benefits of buying a home as compared to renting one are always up for debate. However, one element of the equation is often ignored – the ability to build wealth as a homeowner.Most